DMV Download is the only daily local news podcast created for Washingtonians. Every weekday afternoon, hosts Megan Cloherty and Luke Garrett go beyond the headlines with WTOP’s team of reporters and sources to bring listeners more on the biggest stories impacting the D.C. region. 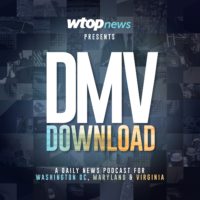 In what Governor Larry Hogan calls the “best session yet after eight years,” he signed more than one hundred bills into law, including those that address first responders’ mental health, cat’s claws and the name of a controversial highway. We speak with the matriarch of the Piscataway Indian Nation about their fight for this law. And a dog in Virginia was set to be euthanized seven years ago but thanks to his owners’ attorney he’s still kicking. WTOP’s Neal Augenstein talks about the years-long fight to free Niko.

A man surprised the Peruvian ambassador’s family when he tried to break into their residence in Northwest, D.C. U.S. Secret Service Uniformed Police officers eventually shot the man they say had a metal stake. WTOP’s Luke Lukert talks about what we know so far about the break-in at one of the District’s largest private properties. And then, WTOP’s Senior Sports Director Dave Johnson tells the reasons behind D.C. United’s decision to fire its head coach.

Masks are now optional on Metro after a federal judge in Florida ended the nationwide mask mandate for mass transit. WTOP’s Luke Lukert rode Metro this morning and talked to riders about the rule change and whether they’re ready to drop the mask on the train.
Then, WTOP’s John Domen takes us inside the Church of Latter-day Saints in Kensington, Maryland before it opens to the public. He shares what to expect and the meaning behind the design of the Mormon temple.

A jury in Fairfax County heard the opening statements in Johnny Depp’s $50 million defamation lawsuit against his ex-wife – Amber Heard – on Tuesday. She called herself a survivor of domestic and sexual abuse in a 2018 Washington Post opinion piece. WTOP’s Michelle Murillo talks about the gruesome details laid out during lawyers’ first address to Virginia jurors. Entertainment and arts attorney Kirk Schroder then breaks down the legal strategies within the case and what precedent it may set for future defamation cases in the Commonwealth. Additionally, WTOP’s John Domen shares his exclusive reporting on why a construction project on Maryland Route 210 is four years behind schedule.

Early Release: The I-95 Nightmare Report

Three months after hundreds of drivers sat stranded on I-95 for 24-hours, Virginia transportation officials released a report on what went wrong and what public transit authorities can do to make sure it never happens again. WTOP’s Dave Dildine talks about the unprecedented situation and details the report’s findings. WTOP’s Luke Lukert explains what actions politicians want to take from the report’s recommendations.